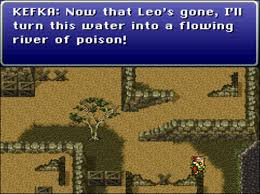 After Leo gets mysteriously called back to Vector, Kefka engages in some not-so-subtle foreshadowing for the player. What’s particularly great about this scene, however, is how truly evil Kefka comes across in such a short time. He tells one of his soldiers that he doesn’t care if the Empire has prisoners in Doma; he wants everyone dead.

But what really drives the scene home is the watching the entire citizenry of Doma collapse one by one. Cyan, the only dehydrated member of Doma, survives. Watching his family die in front of him is heartbreaking. And his transformation into a depressed, bitter, hopeless warrior with a death wish is realistic.

One thought on “7. The Death of Doma”