Right away after meeting Leo, one of the highest ranking generals in the Empire, we begin to identify with him. 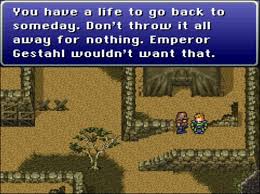 Not only does it help us like Leo, it also humanizes the Empire, which by default gives the game more depth than most. Leo becomes progressively more likable as the game goes on, as he predictably begins to doubt the Empire’s goals and eventually turns against them. It all comes to a head in Thamasa when he and Kefka fight, making it the only good part about Thamasa. For added flare, you get to control Leo during this fight.

Ultimately, you lose. While it’s not surprising, being in control of Leo helplessly makes it all the more depressing. Playing as him is so much fun that it spawned many an internet rumor back in the mid 90’s on how to get him into your party. I remember one I actually tried, which was fighting 100 brachiosaurs in the World of Ruin. Yeah.