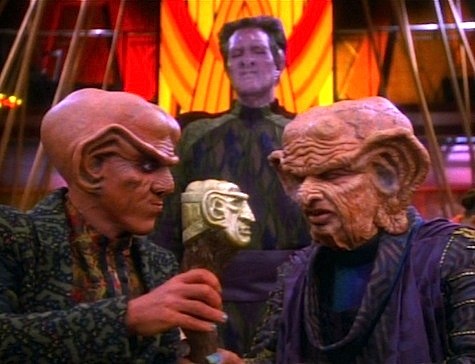 Synopsis: With the sudden death of Grand Nagus Zek, Quark becomes the new leader of the Ferengi Alliance, but he also becomes a target for murder.

Memory Alpha Summary: I guess a lot of fans found this episode hilarious.

Review: The first of the dreaded Ferengi episodes introduces us to the Nagus.

He’s not a completely annoying character, at least as far as Ferengi go, but it’s really hard to care about anything that happens to any Ferengi, as it’s well established that they care about profit (and the often contradictory Rules of Acquisition) above all else, even family. While Quark, Rom and Nog grow into complex characters throughout the series run, it is only due to their interactions with other humanoids. All other Ferengi are just obnoxious and pointless.

As far as this episode, the main thing I gathered from this is that Rom was seconds away from murdering his brother to get his bar, which doesn’t quite feel like Rom.

On the bright side, there’s a nice set of scenes between Sisko and Jake related to Jake’s independence in making his own friends and schedule. Sisko is probably a little more lenient than I would be (Jake misses dinner without calling), but it’s a good learning moment for both of them.