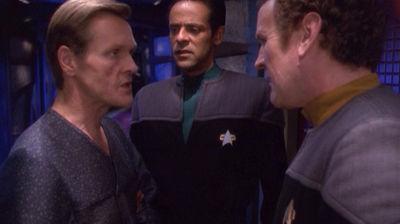 Synopsis: Bashir and O’Brien lure a Section 31 agent to the station in a desperate search for the cure to the disease that is killing Odo. (Part 7 of 9)

Review: It’s kind of nice during this nine-part serial that we have an episode that just focuses on one plot instead of three or four.  And while Star Trek has never been the best at doing mindfuck episodes, this is a solid attempt.  The “exploring someone’s brain through abstraction” has never appealed to me that much, but they don’t get too trippy and William Sadler (Sloan) is perfect for the role.  It was fairly obvious at first that when they “woke up” in sickbay they hadn’t actually woken up, but then they had me almost believing Odo was dead because they drug it out a while, so nice touch.

I’m a bit annoyed that O’Brien continually does dangerous things not related to orders from his superior without telling Keiko.  They try to excuse it by saying how much O’Brien likes Julian and is ha-ha uncomfortable with emotions, but come the fuck on.  It just makes O’Brien look like a selfish douche.