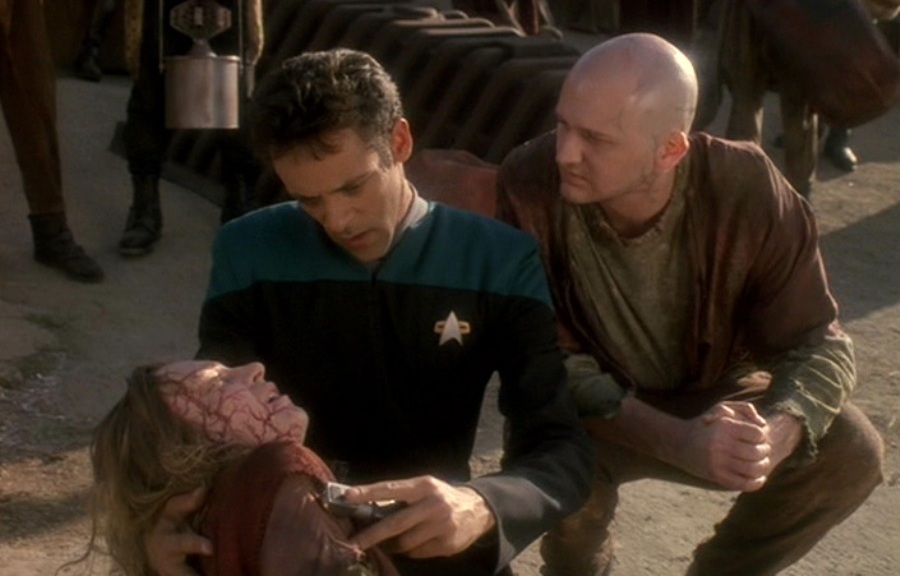 Synopsis: Dr. Bashir works to rid a planet of a plague that was sent by the Dominion as punishment for resistance.

Review: With DS9 I tend to prefer the episodes that are part of larger story arcs, but this is a one-off that I’m particularly fond of. The main crux of the story, that Federation peeps find an epidemic on a new planet, has been done many times before in one way or the other. However, this might be the first time I haven’t been annoyed by trumped up moralism or deus ex machina cures.

Bashir: “Trevean was right. There is no cure. The Dominion made sure of that. But I was so arrogant, I thought I could find one in a week!“

The primary doctor in this community practices palliative care and euthanasia to help those stricken with the quickening, and the writers treat him well. He isn’t pompous. He doesn’t give ridiculous speeches. While he disagrees with Bashir’s attempts to find a cure, he doesn’t get in his way nor does he disrespect him. In short, Trevean isn’t there just to serve another character’s story. I love Michael Sarrazin’s understated performance.  In fact, Bashir is the one who gets his comeuppance.