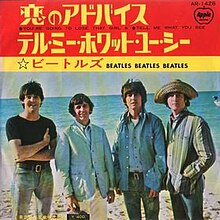 Verdict: As simple and unimaginative as anything on their earlier albums. Saying exactly what you mean is fine in song; country artists have been doing it for years. But then don’t rely on repetitive choruses.

Verdict: Apparently inspired by Little Richard, McCartney wrote a song that I probably would enjoy hearing Little Richard sing. Heck, it’s a decent live song as it is. But the parenthetical comments by the backup singers (I’m really down) get in the way for me. McCartney’s voice is great here but it’s drowned out.

Verdict: I dig the chorus. “Whoa-oh-oh-aye!” is awesome and whenever John sings “When I get home!” I’m reminded of some of his best work. But the verses are brutal. “Come on, if you please. I’ve got no time for triv-i-a-li-ties!”  I just…can’t.

Verdict: The least veiled drug-reference in the Beatles catalog and the most boring. Lennon seems really bored himself. If it weren’t for that it would sound like a damn commercial jingle what with him repeating Doctor Robert’s name 17 times in just 2:15. The fade away at the end if awkward too.

Verdict: Bad day on the countdown for Lennon. He wrote this before the Beatles’ formation and probably should have left it there. I think Paul could have pulled this off better, but even then there’s just not much to it. The Mamas & the Papas covered this, by which I mean the words came out of their mouth in what some people call a song. Bleck.