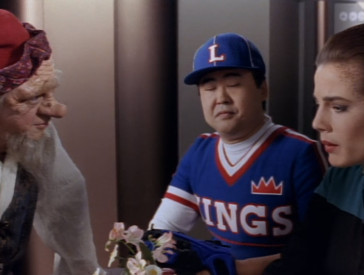 Review: Season one finally begins to pick up with this episode, where the imaginations of the crew come to life in the form of Rumplestiltskin, Buck Bokai (who, incidentally, does not appear to have the physique of a shortstop, or the greatest player ever for that matter), and Bashir’s fantasy version of Dax who is completely submissive to him.

It’s a really fun episode that firmly puts an end to Bashir’s creepiness, and allows he and Dax to form a realistic friendship. The triangular conversations between Bashir, Dax, and fantasy Dax bring back the best parts of Reginald Barclay.

The main weakness of the episode is that for most Trek fans, the solution to the episode (shutting off their imaginations to prevent the station’s collapse) is pretty obvious. Still, it’s an entertaining ride.