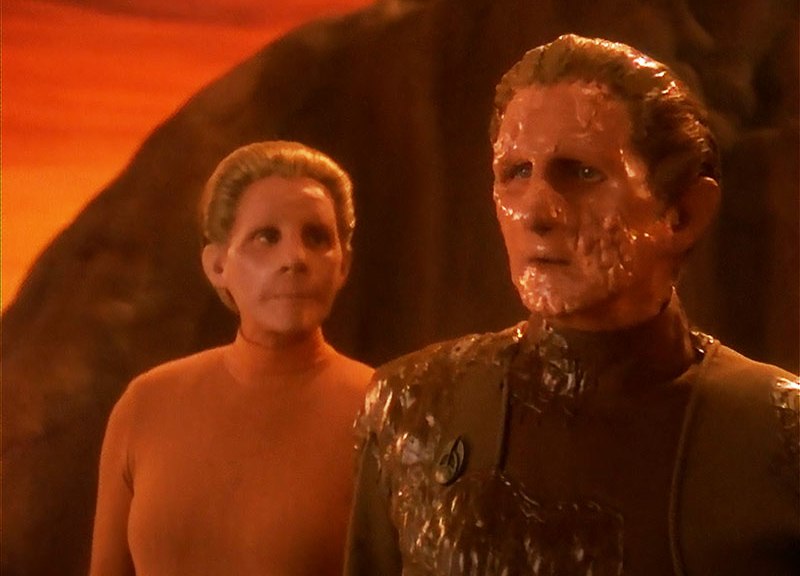 Synopsis: Odo is plagued by an unknown ailment that threatens to kill him. Meanwhile, the Federation and the Klingon Empire move closer to war.

Memory Alpha Summary: It’s a bitch to be hungry

Review: Man, DS9 isn’t afraid to take chances with character shifts. On a lesser show, Odo wouldn’t become human, or if he did, it would be only briefly, as the writers would be scared about not being able to rely on Odo’s shapeshifting abilities to wow viewers. Instead they chose the more satisfying character development path. Then you have the announcement at the end that Odo believes Gowron is a changeling. It wasn’t terribly surprising to me, as Gowron’s personality has changed quite a bit since his interactions with Picard. Still fun, though.

END_OF_DOCUMENT_TOKEN_TO_BE_REPLACED

Garak is back! Finally! He helps take a show about orphaned Cardassian children and makes it dynamite. His friendship with Bashir grows stronger, and his own character develops as well, as he’s forced to help Bashir with the orphaned children, not just to get back at Dukat, but to help his own conscience. He’s still as evasive and wry as ever, and it’s hard not to grin whenever he’s on screen.

END_OF_DOCUMENT_TOKEN_TO_BE_REPLACED

Has it really been almost five years since I reviewed Her Story? Sheesh, I’m getting old. Back then I said I was looking forward to Sam Barlow’s next project. I think I forgot about that as I didn’t discover Telling Lies until about 18 months after its release. Still, it was very much worth the wait.

Mild spoilers under the break. You might enjoy the game more knowing nothing about it.

END_OF_DOCUMENT_TOKEN_TO_BE_REPLACED

Regrettably as the older I’ve become, the less effort I’ve found myself willing to put into playing computer games. I prefer to blame the time constrictions of maturation: fatherhood, home ownership, Netflixing with my better half. Ultimately, however, the greatest factor is my waning patience with gratification. This extends to all forms of media; if I have to wait longer than five minutes for stimulation, my interest wanders. Thus, the piled up bin of pilot episodes (sorry Nurse Jackie), second chapters (you too The Girl Who Played with Fire), and barely played computer games (maybe later Quest for Glory 2) awaiting continuation but more likely relegated to eternally gathering dust. Despite this I’m also not looking for cheap and unsatisfying thrills (I’m looking at you Angry Birds). Her Story may be my panacea, motivating me not only to play through its story, but also to forge on and try other games that have been sitting on my virtual shelf for far too long.