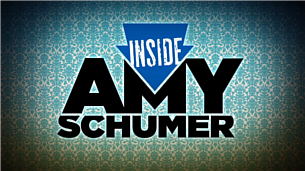 So when I set out to do this list I intended it to be only fictional shows, leaving out stuff like reality shows, variety shows, game shows, and young children’s cartoons. I realized part way through that on my list I had two sketch comedy shows that really stretch the definition of fictional. While the sketches are fictional, there’s often non-fictional bits like the comedian interviewing people or talking on stage. ANYWAY, whatever. Saturday Night Live is not one of them. I wouldn’t even know how to rank that.

Amy Schumer won a season of Last Comic Standing. I find a lot of stand-up comedy awful, but I always liked her a little bit. Early on, though, I felt she spent way too much time slut-shaming herself. It was funny (especially since most of it is made up and she’s doing it ironically), but it was just too much. Her variety show is a step in the right direction. There’s certainly several sketches that revolve around the “Hey, I’m easy!” theme, but there’s some really good stuff in there. Like all sketch shows, there’s a lot of hits and a lot of misses, but I don’t think I’ve seen an episode where I didn’t like at least one skit.

Here’s one of my favorites: