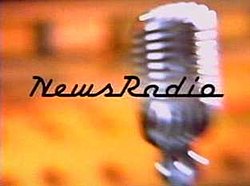 A smart comedy at a time where most sitcoms were still fairly straightforward, NewsRadio was successful due to some sharp, biting humor and a few great performances. I don’t think I realized this at the time, but pretty much every character is unlikable. But with the exception of Andy Dick, they’re also all charming in their own way. Dave Foley plays the good guy you’re supposed to root for, but much like Bateman’s character in Arrested Development, he’s not that much more noble than the people around him who constantly undermine him. The writers don’t pander to the audience with ratings ploys or crowd-pleasing moments. Very refreshing, especially in 1995.

Unquestionably the stars are Phil Hartman and Stephen Root. Every single time they’re on screen it’s a riot. Honestly I’d often begin giggling before the joke was even delivered. So I’m not terribly surprised the ratings were piss poor every single season. Oh, America. This would rate higher, but ugh, Andy Dick.