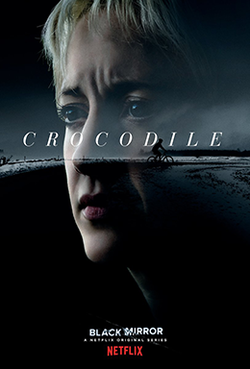 Mia (pictured above) helped her drunk boyfriend dispose of a cyclist he accidentally kills. Fifteen years later, she’s married and a mother and successful. We know this because we see her expensive house and her smiling husband and her smiling son and then we see her deliver a boring speech at a conference and get some mild applause. But then her ex-boyfriend shows up with all his guilt and says he’s going to write an anonymous letter to the cyclist’s family. So Mia does the only reasonable thing and chokes him to death.

Please note that this occurs about fifteen minutes in and is right were the train jumps the tracks. For the next forty-five minutes the train crashes down a long chasm. And we’re in it.

The new technology on display here is a device that can visually recall people’s memories. While it isn’t perfect, insurance companies use it in order to gather a preponderance of evidence. And because Mia entered a plot contrivance, we painstakingly learn that a witness to an accident who didn’t really see the accident has a memory of Mia looking at the accident (right after she did the choke job). And because of this we get to painstakingly watch as the insurance gal marches to her inevitable death by slapping the memory machine on Mia. You see to protect her smiling family and boring speeches, Mia has to murder insurance gal. And then insurance gal’s husband, because he knows too much. And then their baby, because apparently baby memories are incriminating. Mia winds up at her son’s school play and the only surprising thing about the ending is that Mia didn’t have a bomb strapped to her chest so she could run up her kill total. But no, she left evidence. A guinea pig, whose memories of Mia’s shopping spree lead the cops to Mia’s son’s school play. Sheesh, I want to kill myself just writing that sentence.

The only saving grace here is that we don’t have to watch Mia stab the baby. The brutality in Crocodile by itself is enough to make this easily the worst episode of Black Mirror. But beyond its unrelenting darkness, it’s too preposterous to take seriously. Mia’s character is provided almost no depth, and so her rapid descent into serial killing is comical. Even her first murder comes out of nowhere; she spends only a hot minute trying to reason with her ex and there’s nothing about her character that leads us to believe she’s capable of cold-blooded killing. It’s not as if she accidentally killed him out of rage either; it’s very intentional and very brutal.