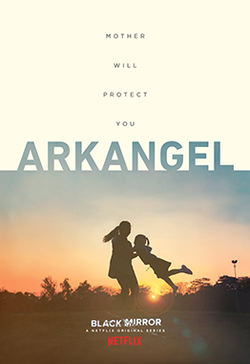 Arkangel is the first episode of Black Mirror to be directed by a woman (Jodie Foster) and focuses more on family than most. The set up is right in this show’s wheelhouse too. Unfortunately, the execution is lacking, focusing on the wrong themes.

Marie is a single mom whose daughter Sara goes missing while at the park. She’s found shortly after, but the sheer terror of the moment convinces Marie to get her daughter implanted with a device that not only acts as a GPS, but also allows her to monitor her daughter’s medical status, see through her eyes, and also censor stressful stimuli (such as a barking dog, or her grandfather having a stroke in front of her). Naturally, this leads to Sara being emotionally stunted as she’s never learned how to recognize and process stress.

Marie eventually turns off the censors and as Sara enters her teenage years she catches up a bit to her peers. Navigating this journey could have been really interesting. However, the script focuses on Marie’s impulse to helicopter parent. By spying with her tablet, she unwittingly catches Sara losing her virginity and using cocaine, then discovering she’s pregnant. This still could have made for an interesting plot, but Marie completely loses it, threatening Sara’s boyfriend and then inducing Sara into an abortion using magic Black Mirror pills. Sara loses it right back, beating the living daylights out of her mom with the tablet, then running away.

Nuance and subtlety would have gone a long way here. Not that this scenario presented isn’t possible, but it feels like the helicopter parent story has been done many times before. Focusing instead on the impacts of the neural censor would have been infinitely more interesting.