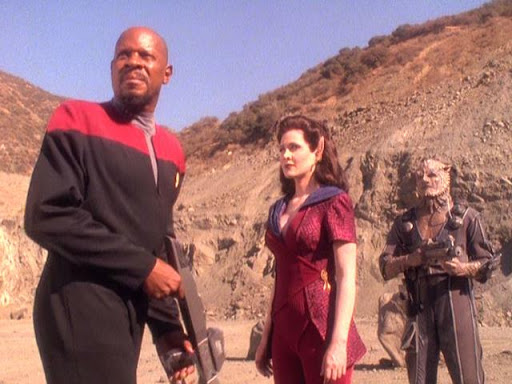 Synopsis: Sisko fights to keep the wreckage of a crashed Jem’Hadar fighter.

Review: A somewhat entertaining but ultimately dissatisfying episode involving Sisko and Co. trying to salvage a Jem-Haddar ship. There’s just so much bad writing here. For starters, four senior officers, including the captain of the freaking space station, are on a remote planet in the Gamma Quadrant for…wait for it…mining exploration. What the hell?  I was waiting for them to say what they were mining for would be used as a defense against the Dominion or something, but nope. Just mining. And sending the captain to do it.

Beyond that, we have three redshirts dying instantly the moment the Jem Haddar show up, but then when they turn their weapons on the senior staff they develop the accuracy of Stormtroopers.

Then we have Muniz slowly dying throughout the episode, which I don’t care about because while Muniz has been in two other episodes, he was barely there. And we don’t get enough background here to believe that O’Brien and everyone else deeply cares about him. That said, Muniz is charming as hell and plays a great dying man.

Finally, the tension just isn’t there. Sisko and the Vorta talk a lot in circles, a lot of people die, and nobody is satisfied. And the writers even make Sisko regret not trusting the Vorta. Wha?  Why would he?

It is nice that Sisko individually laments each crew member’s death, as in most Star Trek episodes, redshirts are often seen as disposable.