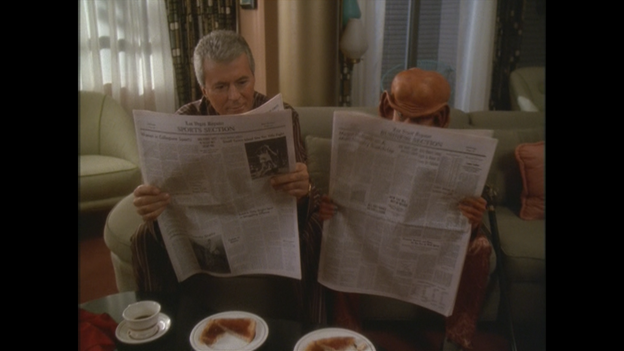 Synopsis: In the aftermath of an injury that left him disabled on AR-558, Nog returns to Deep Space 9, but finds he cannot go on living his uncertain life and seeks shelter within the fictional world of Vic Fontaine and Las Vegas, 1962.

Review: I always like me some Vic Fontaine, and again he turns out to be a much better therapist than the paid therapist on the show.  At least Ezri doesn’t shame Nog like the rest of the crew is doing. It seems unrealistic to me that in the enlightened 24th century, members of the military would expect PTSD to last only a couple of days before every superior officer just be like, “Suck it up soldier!”

All that said, Aron Eisenberg’s performance is really good.  Apparently he got compliments from several combat veterans, which is cool.  It was nice to see the show actually deal with the hardest part of war instead of every episode being a Die Hard movie.