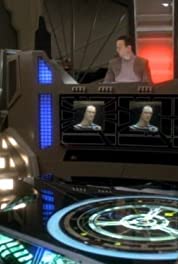 Synopsis: Sisko, Jake, and O’Brien accidentally trigger an old Cardassian security system that believes the Occupation is still going on and the station has been taken in a Bajoran workers’ rebellion.

Memory Alpha Summary: I’m sorry Dave, I can’t do that.

Review: Reminiscent of Disaster, but way more fun as it feels less contrived. Plus, you know, Garak and Dukat show up and have a spat. There’s something so haunting about the automated defense system of the space station as the crew feels increasingly helpless to stop it. Every time they think they are getting close to disabling the security system, they are set back. The climax of this episode is when Dukat arrives, and then tries to leave, but the security system assumes he’s running away from his post and keeps him there as well.

Unfortunately, the final act is a let-down, with several deus ex machinas drummed up by the technobabble writers to get them out of their bind. Also, the episode never gets back to Garak and Dukat, who presumably are pretty embarrassed at this point.

Also, Odo and Quark being trapped in a room was anticlimactic, as they literally do nothing the entire episode other than talk. At least Odo gets in a fantastic insult as the episode closes.