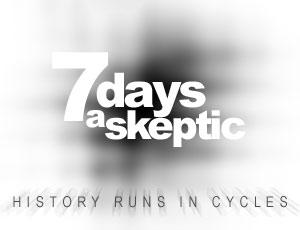 Winner of Best NPC and Best Use of Sound at the 2004 AGS awards, 7 Days a Skeptic is a worthy follow up to 5 Days A Stranger, if for different reasons.

Here you follow a different set of characters on a space ship far in the future. They also begin suffering at the hands of the Czho hellscape. You play the counselor on the ship and must protect yourself while deducing who is killing everyone (again). The point and click interface has been streamlined, and the puzzles, in general, are much more straightforward. I never once pixel-hunted and moving around the ship was fairly quick and painless. In fact, the game should take the average adventurer only a couple of hours to win.

The feature most welcome–that 5 Days a Stranger lacked–is a regular threat of dying, with several intense chase scenes. The music heightens the senses during these scenes and the difficulty is also spot on. Unfortunately, the plot is a disaster, with several gaping holes that took me out of the game the rest of the time. Even though every one on board is presumably a senior officer, most of them have solo access to most systems, which means if one of them is unavailable, the ship is fucked. Worse than that, the other characters are frequently asking you, THE COUNSELOR, to take over their duties, whether it be in engineering or space walking. This reminds me of what I hated about the Law & Order games, where scientists would ask the cops to do their science for them (for puzzles!).

That said, I forgave these issues as the pacing is perfect and there was never time to get hung up on anything annoying. There’s the right amount of spookiness, danger, and charm. The ending is…controversial. I’m fine with it, but it didn’t quite land with me.

As with 5 Days a Stranger, I paid for the special edition (now freeware) replete with director commentary, hilarious deleted scenes, and a fun Easter egg. Yahtzee completely won me over (during the commentary) when you wind up walking outside the space ship:

“Originally you fell off the ship at the drop of a hat from making even the slightest mistake. Then I remembered my name isn’t Roberta Williams.”