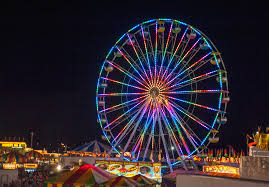 Your lead character has an overgrown or undergrown (internal or external) body part. Even if he or she does a good job of dealing with the abnormality, it comes into play for the purposes of this story.

The last of the fair goers climbed into their seats. Jarrod always enjoyed the final Ferris wheel ride of the night. Using his good hand, he pulled the lever to start the trip.

Jarrod was cursed with a right hand the size of a four slice toaster. It made him popular, and kids would project their fantasies about what an awesome quarterback or power forward he would be. But his hand was useless. It couldn’t grip a pen, let alone a ball. He couldn’t type. He could pull a lever.

The ride ended and he helped each couple get on their way. A mother and son were the final twosome, and their exit proved more cumbersome.

“Again! Again!” the boy cried, slamming his hands against his knees.

“Sweetie,” Mom tried to interject. “We have to…”

“No! Again!” screamed the boy. She sat back, defeated.

Jarrod knelt by the boy. “Hey, kiddo,” he smiled, raising his hand. The boys eyes grew two sizes at the freakish appendage. “Awesome job up there. How about a high five?”

The boy grinned, reared back, and let Jarrod have it.

Mom took her son’s hand and led him out the gate. “Thank you,” she whispered.

K: Now that we’ve seen a regular Joe with a deformity being gawked at by children, it seems obvious to the point where I almost think there should have been more of it. It’s a very small story, but it’s touching without being too manipulative. BRONZE

MN – I like the realization lines “he couldn’t, he couldn’t, he could.” Very concise but effective. To see what else he can do, which is to say, anything anyone else can, is good. Leaving it at this little interaction was a great idea, instead of going too big by having him realize his calling, or trying to get with the mom, or something else like that. This was just very honest. SILVER

In Turbo you really don’t have time to weigh a bunch of different options for your story. The first thing I thought of was “BIG HAND” so I just ran with it. At 18 minutes, I had 238 words, and had 7 minutes to cut my story down to 200 words. I wish I could have added more reaction from the little boy, or added more info about our protagonist, but overall I’m satisfied with it.

Most importantly, The Hidden Legends of Temple Grandin did extremely well, scoring 30 medal points and easily finishing in first place for the week. Two teams had to eliminate a player due to non-submission, and there are now 22 players remaining.