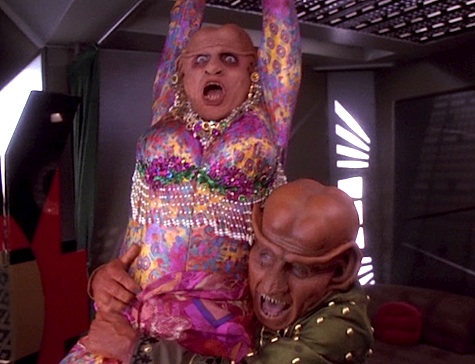 Review: Widely considered to be the worst episode of Deep Space Nine and you’ll get no argument from me.

Most Ferengi episodes are not nearly as funny as they try to be, though occasionally they can hit the right slapstick note for a while. This one fails at every turn to be funny or insightful and is incredibly offensive.

We have Quark at the beginning trying to sexually exploit one of his employees. Then we get the tired Ferengi debate about the worth of females. Then to save the day Quark has to dress and act like a female, emphasizing as much as he can every stereotype one can think of. Then another male Ferengi tries to rape Quark in what is shot as a humurous scene. And to top it off, in the denouement Quark laments his female qualities he used (kindness, empathy) and his female employee laments that he doesn’t want to sexually exploit her anymore(!).

Wait, we’re not done. Quark changes his mind at the last minute and tries to sexually exploit his employee one more time.