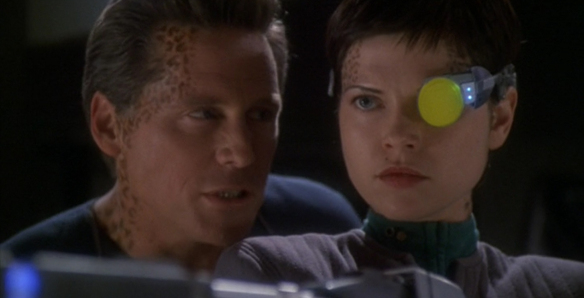 Synopsis: After several crew members are murdered, Ezri summons the memories and personality of Joran Dax to help her find the murderer.

Review: An occasionally effectively creepy episode marred by horror tropes and Ezri’s constantly furled brows that do nothing to elicit emotion from me.

I appreciate that they brought back Joran, though the whole, “Yeah, you know you want it” whispering he does all episode gets ridiculous.  Also, when Ezri’s on the promenade late at night and hears a noise, she just follows it without calling security, getting her phaser ready, or anything.  Not only that, Worf also doesn’t announce his presence until he’s right on top of her.  Just very contrived to get those two to have a real conversation.  Finally, that Sisko doesn’t get in the way of Ezri’s investigation after she nearly kills an officer with a knife is out of character and ridiculous.

Complaints aside, the mystery is fun and the modus operandi is quite clever.  The special effects for the gun are very well done and the climax where Ezri has to shoot the Vulcan is good stuff.