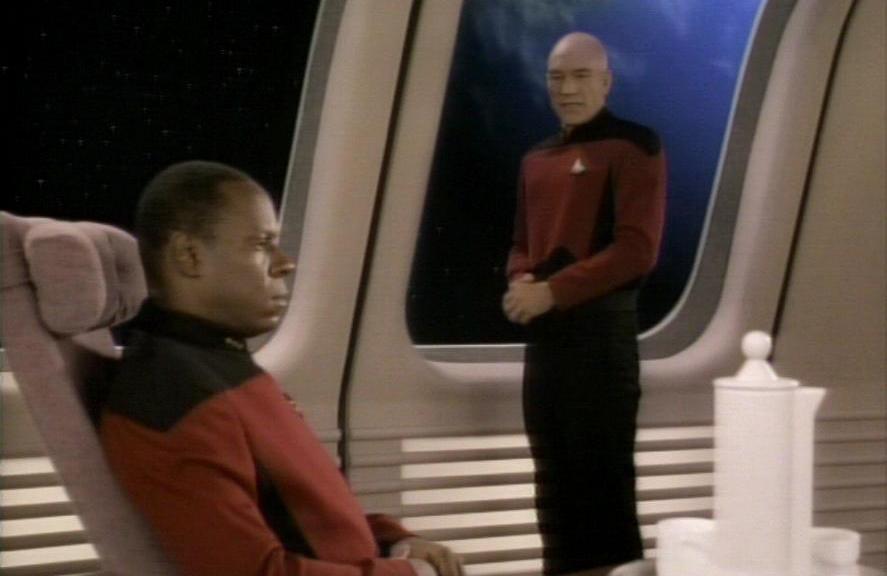 Synopsis: Three years after his wife died at the hands of the Borg and following the Cardassian withdrawal from the planet Bajor, Commander Benjamin Sisko and a new crew of Starfleet and Bajoran officers take command of an abandoned Cardassian space station and make an incredible discovery that will change the galaxy and Sisko’s future.

Review: The pilot of DS9 tries really, really hard to usher in a new era of Star Trek. Like most pilots, it has its ups and downs. The intro is great, utilizing one of the iconic moments of the currently running TNG series (Wolf 359) as a backdrop for our Captain Sisko’s character. Using Captain Picard could have been cheap, but it works seamlessly with the plot. Sisko’s confrontation with him is fantastic, as he reminds Picard they had already met before (when he was Locutus).

The setup for the show is also written well. My favorite two species introduced in TNG were the Cardassians and the Bajorans, so focusing on them was perfect. Introducing the Gamma quadrant was doubly brilliant, as it would allow the show to reintroduce a whole bunch of new species without breaking continuity.

What didn’t go well was the introduction of the rest of the show’s characters. Kira is a bit too hostile to make sense as a first officer. Dax’s introduction is so short that it’s confusing, especially since to this point our only knowledge of trills are their weak introduction in TNG. Other characters also don’t get enough screen time, including Bashir and Odo. The two introductions that went really well were O’Brien’s (whom we already knew) and Quark’s, which is probably a good thing considering everyone hated the Ferengi and the leash on accepting one as a main character was going to be rather small.

I also really didn’t care for Sisko’s agonizingly slow philosophy debate he has with the aliens in the wormhole. It’s a bit interesting, but it really kills the pace of this episode. Like Patrick Stewart, Avery Brooks is a classical actor. Unlike Stewart, he hasn’t mastered it, at least for television. He emotes as if he’s on stage, enunciating every syllable so the people in the back can hear. Brooks improves considerably over the course of the series, but I could barely stomach him here. At least I buy his relationship with his son Jake, unlike the Beverly/Wesley embarrassment of TNG.