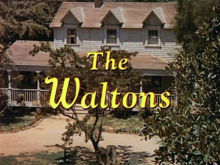 A really charming show about a family trying to survive in the Virginia mountains during The Great Depression. There’s a lot of authenticity, and the character of John-Boy is played pretty damn well by Richard Thomas. And there’s been at least fifty times where I’ve been in a room with family where everyone is saying good night to each other and someone adds, “And good night Mary Ellen!”

Thing is I have zero desire to ever watch this. While it’s interesting, I was never really moved by it.