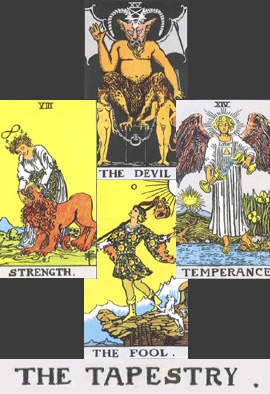 Tapestry was one of those games that was pretty revolutionary when it was released. Replaying parts of one’s life wasn’t a new concept by any means, but the storytelling device was ripe for the interactive-fiction treatment. As such it wooed me at the time, but replaying it all these years later I mostly just see the flaws.

The first problem I have with the game is that the story and all the player’s goals are spelled out entirely in the prologue. It’s a somewhat interactive text dump, but for the most part it successfully removes all wonder from the playing experience. You are shown key moments from your life you can replay, you are told how you can replay them and how you can reach the three distinct endings. What follows is essentially the video game equivalent of cutscenes: lots of exposition without much interaction. Yes, there are a couple of puzzles, but they’re rudimentary and you have to more or less repeat the puzzles on each playthrough which is quite tedious.

The second problem I have with the game is the simplicity of the moral choices. The first one involves deciding whether or not to go to the hospital to watch your mother die or save a small family business from going under. Perhaps somewhere at sometime a real human has had to face such a decision, but it didn’t move me; all I could think about was that my jerk of a coworker Mike couldn’t cover for me while I went to the hospital. The second moral choice involves euthanizing your wife or trying to prolong it with a new drug treatment; the moral debate over euthanasia aside (and why are there only two options here?), all I could think about was how silly it was that the player and his wife seemed to never have once had a discussion about this before the player is forced to make the choice.

The overall theme of fate and guilt is a good one, and Ravipinto’s writing and coding are solid. But the design of the game and the moral choices left me cold and I found it hard to care about the characters or their fates.